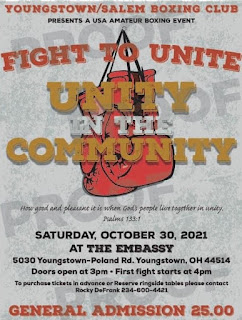 Saturday afternoon will be more than the blood, sweat, and tears that happen between the ring as Youngstown-Salem Boxing Club will host its first amateur card to bring attention to a bigger cause.

The show is being billed as "Unity in the Community".

Recently, Youngstown has been under fire with all its shootings and tensions, and what better way to help bring unity back to the community than the sport that helped put the city on the map alongside the now paralyzed steel industry that once flourished here.

Headlining the show will be #1 ranked Zion Hensley, a student at Western Reserve, who finally gets to fight in her own backyard after spending much of the past two-plus years on the road facing the best competition at her age and weight class at the national level.

Though she will be fighting at home, the level of competition for Henley will not relax as she will be taking on the #3 ranked girl.

Many local fighters along with fighters from out of state will be showcasing their talents at The Embassy on Youngstown-Poland Road as well.

Posted by Youngstown Boxing at 12:48 PM