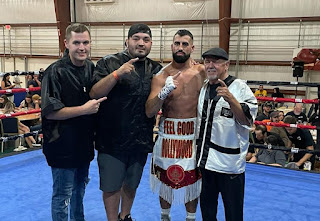 Danny Rosenberger will make the trip to West Virginia, a place he's certainly becoming familiar with as he will take on Vitalii Gubkin in a welterweight showdown for the USBF National Title in the events co-main event.

This will be the second trip in a row for Rosenberg to the Mountaineer State which he has frequented many times before as a fighter.

"I'm starting to feel at home in West Virginia.  They treat me well and I'm starting to create a fanbase down there I believe", said Rosenberger on heading to Vienna, WV this weekend.  "I had about 100 people come up to me and shake my hand and want to meet me and they are very welcoming and love my style of boxing".

The fans aren't the only ones making the 31-year-old feel at home in West Virginia.

"The commission is very easy to work with and fair.  They don't play favorites like some states do for the hometown fighters so I'm excited to fight in West Virginia again and look forward to a lot more fights there soon".

Hopefully, more fights are on the docket for Rosenberger in the near future as the Niles native was one of the most if not the most active fighter in the state of Ohio before COVID scored a technical knockout and put the sport at a standstill.

Rosenberger will be looking to remain in the winners circle having won his last time out in impressive fashion in his first bout under new trainer Joe Board who he contributes a lot of his recent success and newfound desire to succeed in the ring.

"Everything with Joe has been great", said Rosenberger of his training in preparation for Saturday night.  "We've been more dialed in on road work, sparring, and gym work, back to the old school blood, sweat, and tears training".

Though Board is the main reason Rosenberger travels over an hour each way near the Ohio River town of Toronto, he also knows he is going to get great work in that gym which he is very grateful for.

"I also have to give credit to a few people in the gym for helping me prepare for my last fight and taking time off and helping me for this fight", Rosenberger said of his preparations for the fight.

With camp now behind him, the only thing left for Rosenberger is to climb between the ropes and face Gubkin.

"He's on a nice little win streak but that will come to an end on October 30", Rosenberger said of his opponent.  "He's a Russian fighter so I know he's going to be a tough opponent and will come at me with everything he has but we are prepared for that and willing to leave it all in the ring to that title", stated Danny on his opponent.

"I believe my movement and speed will be too much for him".

Fans who can't make it to the Grande Pointe Conference and Reception Center in Vienna, West Virginia can watch the event being billed as The Takeover 3 on pay per view on their devices by heading to the following link: F55LIVE, first bell is slated for 7:00 PM.

Posted by Youngstown Boxing at 9:17 AM