Zion Hensley to fight for National Title today in Missouri 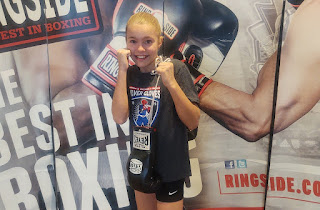 It's national championship day in Independence, Missouri as champions will be crowned in the 2021 Silver Gloves Tournament.
Zion Hensley, a student at Western Reserve will be in action today during today's championship session which kicks off at 1:00 PM ET.
Z, who will fight out of the blue corner will take on Emily Peres in bout #12 on ring #3 in the 90 lb. championship bout which will be streamed can be viewed here for $9.99.
For those planning on viewing, tune in early as its hard to judge how long preceding bouts will last.
Posted by Youngstown Boxing at 5:49 AM