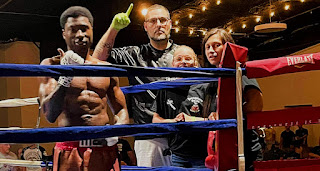 Vic Toney is back.

Toney scored a brutal third-round knockout as the 33-year-old who now trains at the Youngstown-Salem Boxing Club with Rocky and Alecia Defrank improved his record to 6-1-1 with his destruction of the gritty Joel Guevara (4-7-1) in super welterweight action at the Boyd County Community Center in Catlettsburg, Kentucky.

From the opening bell, Toney showed dominance landing a couple furries in rounds one and two before landing a perfect combination that sent his opponent to the canvas and secured the referee stoppage.

Fingers crossed this is just the beginning for Toney as he enters a new phase of his career with a boatload of confidence.

Posted by Youngstown Boxing at 6:28 AM