Rosenberger set for ring return this weekend in Morgantown, WV 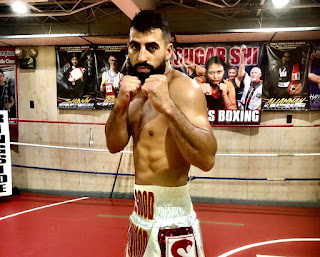 Before COVID-19 came out swinging and sidelined the sport of boxing, Danny Rosenberger was the busiest boxer in Youngstown having fought five times in 2019 and once in early 2020.  Now the middleweight is back and with a new trainer and at a new weight.

Though he's been out of competition that doesn't mean Rosenberger has been out of the gym as the Niles native has linked up with Joe Board of Board's Boxing in the Ohio River town of Toronto.

"It's definitely different in Toronto with Joe," said Rosenberger.  I feel like he brings out the better Danny, the part of me I never knew.  The way he talks to you and the little tricks and knowledge he has for the game of boxing just feeds my fire for the sport which is the reason I commute an hour to his gym 4-5 days a week."

Rosenberger won't have an easy task in his return, but what should we expect from a fighter who fought future "The Contender" participant Gerald Sherrell on a day's notice.

Standing in the way for his ring return is 28-year-old West Virginia native Zachary Randolph who will bring a 5-0-1 record into the evening while fighting in front of his hometown fans.

"So many fights where I feel as I won and lost due to fighting in the guy's backyards which is something that I am once again doing" stated Rosenberger when asked about fighting an opponent on his home turf.  "I need to absolutely dominate or stop this guy to get the win as we know I am not the judge's favorite for the decision".

The one advantage Rosenberger sees for himself despite taking the fight on short notice on somebody else's turf is the fact that the 6-round bout will be held in the super middleweight division.

"I'm moving up to 168 pounds for this fight which is the highest weight class I've ever been at," said Rosenberger.  "I walk around at 165 so I have to put on rather than cut weight this time.  It is short notice but we're ready and stay in the gym for moments like this".

If all goes acorrdingly, you will be hearing plenty of news moving forward of Rosenberger getting in the ring.

"I plan to become a very active fighter once again now that the pandemic is hopefully coming to an end" said Rosenberger of his future plans".  "It was defintely challenging training all those hours and driving that far the last 20 months and not fighting but now it's my time and I"m excited to step back in there".

Posted by Youngstown Boxing at 10:48 AM