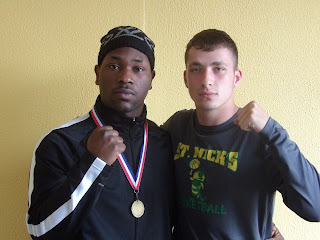 Headlining the weekend was 21-year-old Marquae Calhoun who won the 178 lb. championship.

"I knew I had power in my punches but I didn't know I had that kind of power until I actually did it," said Calhoun who won his first bout in 26 seconds before stopping his next opponent who sported a 5-0 record coming into the fight in the second round.

Calhoun will be the first to tell you that the power in his hands was not the only contributing factor to his championship run.

"I took the loss in my first ever match a few months ago and focused on what I did wrong and not what I did right and I faded at the end of that first fight so I started running more doing 5.2 miles every other day to the gym from my apartment to get my stamina up and kept telling myself this is what I got to do to be a champion".

Though championship aspirations drove Calhoun this past weekend he also had inspiration in the crowd.

"My dad ended up showing up and I felt like having him there took a lot of the pressure off me as he just entered my life again a few years and having him there made me realized how much he cares and it really lit a fire in me".

Calhoun also fed off the energy of his teammate Giavoni Farina who went 2-1 on the weekend including a victory over a previously undefeated fighter en route to the silver medal at 141 lbs.

Farina, 19, who hails from Struthers found himself in three complete wars during his weekend.

"I think three fights on me took its toll on me during the championship bout but I fought hard," said Farina who was 1-0 heading into the weekend and only been boxing for roughly 5 months.

Posted by Youngstown Boxing at 5:22 PM