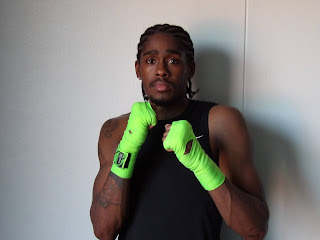 Boxing has recently found a special connection with the sport of basketball as many players including Damien Lillard, John Wall, Kristaps Porzingis, and Kyle Kuzma to name a few have added the sweet science into their offseason workouts.

Some basketball players just take it a step further as is the case with LeAndre Jackson.

As a former hoops standout at Boardman High School and Thiel College, Jackson is changing it up a bit as the 6'5" 27-year-old will go from dodging defenders on his way to the basket to defending punches flying at his face.

Jackson has been working in the boxing gym for two years having started out at Downtown Boxing Club before transitioning to the Youngstown-Salem Boxing Club. and now this weekend will be go-time for Jackson to put everything he has learned between the ropes to use,

"Basketball fundamentals are so much easier as boxing is so much attention to detail from footwork to defense," said Jackson as he prepared for this weekend's 2021 Tri-State Golden Gloves event being held in Huntington, West Virginia.

Boxing will be no layup for Jackson but I'm sure on competitiveness alone he'll have the advantage this weekend.

Posted by Youngstown Boxing at 10:25 AM