Fighting forward: Alliance native Ryizeemion Ford looks to get back on track tonight in Pittsburgh 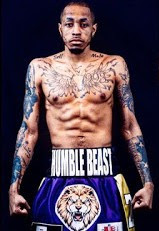 The past four months have probably felt like an eternity for Ryizeemion Ford.

First the COVID-19 pandemic kept the usual busy fighter from Alliance out of the ring for roughly a year.  Secondly, Ford took his first professional loss when he finally did get back to doing what he loves.

Now the 27-year-old who goes by the alias Humble Beast is ready to fight forward and put his loss to undefeated Elwood City, PA native Rosolindo Morales behind him.

"I don't want to lose again and that's what is driving me." said Ford when asked what he took away from his last fight.  "I've learned to stay locked in and not let outside things effect what I'm doing".

With his focus on track, Ford still had no scouting report on his opponent being that it had changed three times before being locked in on a 25-year-old south paw from Roanoke, VA, Ryan Venable.

While giving insight into his camp on social media, Ford has also taken the time to thank his sponsors posing with signs and showing off his trunks.  "It means a lot have businesses support me from my city.  Having sponsors helps us fighters because if have them then more want to help."

Posted by Youngstown Boxing at 8:14 AM