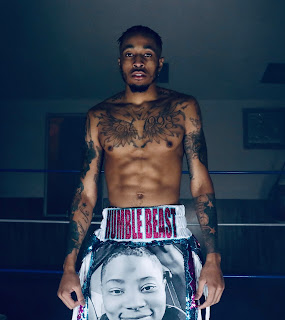 2020, for better or worse is a year that nobody will soon forget.

It's hard to believe that we are closing in on the one-year anniversary of our nation almost having to reach for the pause button and play the waiting game as the COVID-19 pandemic spread its way through our nation.

As life paused, the sports world did so right along with it as this website slowly faded away into obscurity with nothing to write about.

With life slowly treading in the right direction but not without many uphill battles remaining to conquer before our lives can go back to 100% normalcy, Alliance native Ryizeemion Ford is finally ready to climb back into the ring tomorrow night for the first time since right before the pandemic last year when he scored a TKO victory over Aaron Jamel Hollis on March 7th to improve his record to 4-0 with 3 KOs.

"I just stayed in the gym and told myself keep working something will come up!", said Ford with excitement when asked how he kept himself physically and mentally ready during these times of uncertainty.

Ford admitted however that at times he wondered if all the work he was putting was without purpose.

"I had few opportunities but they turned me down but now we’re here".

The "here" for the 27-year-old Ford is a date against undefeated Rosalindo Morales of Ellwood City, PA who will bring an unblemished 3-0 record into the ring alongside almost two-years of ring rust having last fought in February of 2019.

"I don’t really know anything about him, I’ll make my adjustments though", said Ford of his 27-year-old opponent.

While Ford has made it known that he fights for Alliance because of how they support him, he will also be fighting in memory of his cousin who he knows will be in the ring with him at the Washington County Fairgrounds in Washington, PA both spiritually and in tribute on Saturday night.

"My trunks are dedicated to my cousin Amy Lynn that passed last year", said Ford who is becoming known for his very original ring wear. "Her and I were very close".

While he remains focus on the task of hand, Ford admits that he like many people of all walks of life almost feels as if he has to make up for lost time and plans on staying as busy as possible but in no way is overlooking Morales.

"They say this guy is a tough fighter but feel like I’m the guy to beat right now so they better be ready".

Posted by Youngstown Boxing at 10:36 AM