Normalcy ahead: Hensley ready to knock 2020 out with a bang 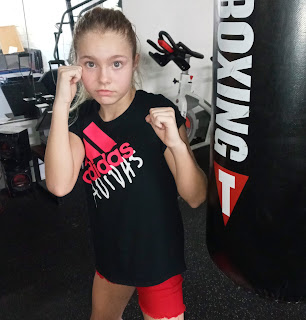 During a period of time this Spring all gyms stood eerily silent as the uncertainty of the COVID-19 virus swept through our nation forcing a various amount of closures and causing the sports world to come to a sudden halt.

As we all find ourselves currently fighting through another rise in cases while still trying to find a way to go about our normal day-to-day lives, 11-year-old Western Reserve student Zion Hensley just keeps doing what she loves and as truth will have it, she never stopped as the 5th grader found ways to keep herself sharp and in shape.

Now that she's openly able to work out again, she's back with her trainer, the former undisputed middleweight champion of the world Kelly Pavlik.

As you walk through Pavlik's Mi Gym in Columbiana the first sounds you will hear is the sound of iron weights clanking as patrons put weights back on the racks but as you walk closer and closer to the back area there is a chance you might hear the sound of leather popping.

With each punch Hensley throws, she knows she is closer to a possible ring return with a trip to USA Boxing Nationals being held December 5th-12th in Shreveport, Louisiana.

Hensley, who will enter the ring for the first time since fighting in Kansas City in January and will fight at the 80-pound weight limit has been waiting for this moment.

"I stayed in shape running at the Western Reserve track and once I was able to get back into the gym I've worked on throwing way more punches and moving side to side with improve footwork" said Hensley.

When Hesnley did find some time away from the gym, she ventured into the entertainment business by starring in a music video for Koda Allen, a rising talent from Youngstown starring in the video for his song Elephant form his latest album, 4th of July which he released this past summer.

Along with the music video she also made a cameo alongside Pavlik on the Ohio's Finest Podcast by Savage MMG Presents in late September.

Though COVID-19 impacted many young fighters, Hensley used some of that time to give back and along with some of her friends raised $1,150 dollars by selling bracelets for the Mercy Health Foundation to purchase PPE.

Now with her return to action around the corner, Hensley is set to make the trip south with the help of some generous donations.

Posted by Youngstown Boxing at 2:46 AM