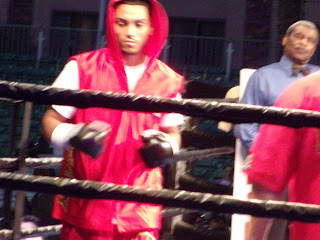 Alejandro Popo Salinas will do battle tonight in Las Vegas on ESPN as he will take on 12-0 23-
year-old Andres Cortes  of Las Vegas in a scheduled 8-round lightweight contest.

Salinas, 25, who has recently moved away from Youngstown in an attempt to revive his career after dropping two of his last three fights will enter the ring for the first time since dropping a controversial decision to Steven Ortiz in September.

This is a huge opportunity for Salinas to take on an undefeated fighter on the national stage and the first television appearance for Salinas since defeating  Duran Vue in September of 2017 when he scored an unanimous decision victory on FS1.
Posted by Youngstown Boxing at 4:14 PM