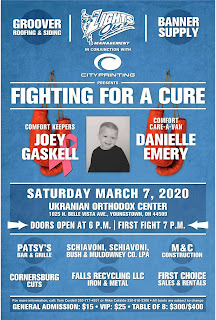 Its been months since Youngstown has hosted a night of boxing but that will all change on Saturday night as Lights Out Management will have roughly 12 to 15 bouts on tap in what promises to be a great night of amateur boxing at the Ukrainian Hall which will benefit a great cause.

The two beneficiaries of the show will be 3-year-old Joey Gaskell who is battling cancer and Danielle Emery who is battling a rare condition called gastroparesis and is going to use the funds raised to go to the Mayo Clinic to seek further medical attention.

Slated to be in action from the area is Brian Sims of Downtown Boxing Club who could be making his last amateur appearance in the area before making the jump to the pro ranks later this year.

Other locals slated to appear are Jake Lester, Tim Louis, Niyjah Justice, Devin Tate, and a husband and wife duo in Courtney and Steven Chaplow who will be joined by fighters from the Cleveland, Akron, and Pittsburgh area.

Tickets start at $15 for general admission and will be available at the door, which open at 6:00 PM with first bell slated for 7:00 PM.

Posted by Youngstown Boxing at 5:23 PM