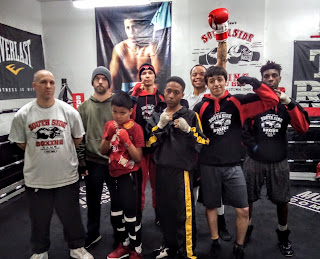 The move to Erie Street however has done wonders to the attitudes of the fighters that cram into the gym every afternoon to train under the watchful eyes of Loew, Vinny O'Neill, and John Hutter.

"This is a team and that's what I'm preaching to these kids", said O'Neill.  "No one is above the other and we will pick each other up until we all earn our right by fighting the top competition".

O'Neill will have his team strong this Saturday evening as he will have five fighters slated to be in action at the Ukrainian Hall.

Tyrell Richards, 16, will bring his 7-1 record into the 130-pound bout and might be the most pleasant surprise in the Southside stable of fighters.

"I'm so much better now than when I started about a year and half ago", said Richards.  "We've been working on my footwork and using my head more and have learned that you can still hit hard while also being a fundamental boxer".

Like many of the young fighters at Southside, Richard's echoed the team and friendship aspect of the gym.

"I've made good friends down here and we push each other, work together, and just growing as fighters together".

Joining Richards as a pleasant surprise is 17-year-old Aseel Alsaamameh who will be fighting at the 132-pound weight limit.

Alsamameh recently competed in the opening portion of the Silver Gloves in Cleveland and pushed his nationally ranked opponent to the brink of defeat but ultimately lost a close decision while gaining a wealth of confidence and experience.

"I felt I grew as a boxer that night showing that I could compete with a nationally ranked fighter", said Alsamameh whose been training for about a year of his Silver Gloves experience.  "It was great being around my team which has become a second family to me".

While Richards and Alsamameh have shown to be pleasant surprises, O'Neill will see if he has another diamond in the rough on Saturday night as Deven Tate, 17, will make his debut at the 155-pound weight limit.

"I wanna be world champion", said Tate on why he started lacing up the gloves a year ago.  "Boxing keeps me off the streets and keeps me out of trouble but it's also in my blood as my uncle was a boxer".

Rounding out the Southside Boxing Club members who will be in action on Saturday night is crowd favorite, 10-year-old Juan Jauregui who will bring a wealth of ring experience into his 85-pound fight and 34-year-old Tim Loius who will be fighting at 153-pounds.

Loius whose been at Southside Boxing Club for roughly a year and half will be fighting for the first time representing the club, but is no stranger to the ring.

"It's awesome being part of a team, its a lot different than my old gym in Pittsburgh", said Loius who will be fighting for the first time in roughly four years.  "I've been fighting off and on since I was 21 and want to get some more fights in with what little bit of youth I have left in me but I feel this is the best shape I've ever been in".

Though he won't be in action this weekend, 15-year-old Jacorian Dent will be fighting next weekend in Pittsburgh taking on a fighter from Ireland.

"Saturday night is a step in these guys earning rankings", said O'Neill.  "We treat club shows just as important as tournaments".

First bell a the Ukrainian Hall is slated for 7:00 PM with the doors opening at 6:00 PM.

Tickets will be available at the door starting at $15 for general admission.
Posted by Youngstown Boxing at 6:26 AM