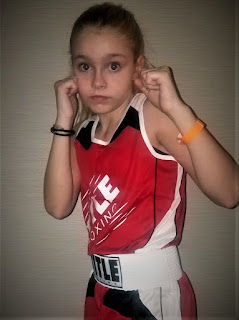 The amateur team of Southside Boxing Club fought hard and left it all in the ring this past weekend in Cleveland, but in the end only one representative will be advancing through to regional action.

Zion Hensley, 10, a student in the Western Reserve school district secured a spot in the regional portion of the Silver Gloves competition which will be held in Cleveland the weekend of January 18th and 19th.

"Great," said Hensley who fights at 70-pounds said when asked how it feels to secure spot in the regional portion of the tournament.  "I really feel like I am inspiring other girls".

Inspiring other girls has come with a price, however.  The price of hard work which Hensley displays with the time she puts in at Southside Boxing Club with trainer Jack Loew.

"I worked extremely hard, I've run miles in the cold, I sparred three to four times a week and I picked up vertimax training with Kelly Pavlik".

With two previous bouts under her belt, Hensley knew that she needed to pick up the training for tournament competition.

"There is more pressure because you fight more fighters and you can fight everyday," said Hensley of stepping up to tournament action.

If Hensley can get through the next stages of the competition she will advance to Independent, Missouri for the National portion of the Silver Gloves being held January 29th through February 3rd.

Those wishing to help support Hensley with travel expenses can do so by purchasing a shirt for $20 at the following locations or by contacting Zion's dad, Jason at 330-942-7409: