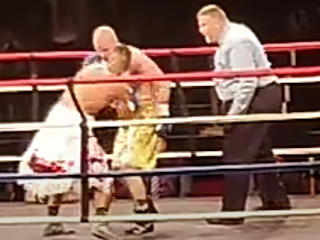 Sometimes its just not a guys night and Youngstown middleweight Danny Rosenberger had one of those nights as he dropped a decision to undefeated Chicago native Mikey Dahlman last night at the Horseshoe Casino in Hammond, IN.

Always humble in defeated, the 29-year-old Rosenberger took to social media to congratulate his opponent and stated "I didn't perform to the level I'm capable of".

Dahlman, 27, controlled the pace of the six round middleweight fight which was for the WBF Americas championship belt by using his size advantage and showing the ability to land the jab as well as working the body.

In the end, all three judges at ringside scored the fight 59-53 for the hometown Dahlman.

Rosenberger absorbed multiple low blows in the second round which led to a point deduction but it never deterred Dahlman from doing work to the body.

With the victory, Dahlman improved his record 9-0 while Rosenberger saw a two-fight wins streak come to an end as his record fell to 6-8-4.

Rosenberger eluded post fight that he will more than likely stay in the 147-pound weight class in the future.
Posted by Youngstown Boxing at 5:59 AM