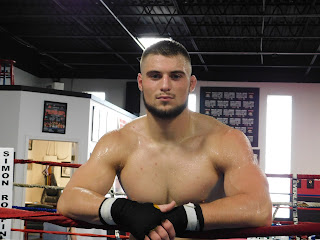 Fresh off his 2nd round TKO Bellator victory earlier this month, New Castle native Dalton Rosta will join The Punch Line with Kelly Pavlik and James Dominguez this evening.

Rosta, who celebrated his 24th birthday earlier this week,  secured his latest victory by ground and pound over previously undefeated Claude Wilcox of Hot Springs, Arkansas at the 205 pound weight limit in Uncasville, Connecticut at Bellator 231 to improve his pro record to 2-0 with 2 KOs.


Considered on of the top amateur MMA fighters at any weight class with a perfect 7-0 record before turning pro, the Youngstown State University graduate is now ranked as a top 10 light heavyweight in Bellator and considered one of the top young pros in MMA.


With his name starting to gain more and more media attraction, Rosta will join this evenings Punchline which will air live on Facebook and YouTube.


The Punchline, which features Youngstown native and former middleweight boxing champion of the world, Kelly Pavlik with his co-host, James Dominguez has turned into one of the top and most entertaining boxing shows around and is known for its interaction with fans.


Fans can tune in tonight starting at 7:00 PM EST by visiting The Punchline on Facebook here or subscribing on YouTube here.
Posted by Youngstown Boxing at 9:39 AM