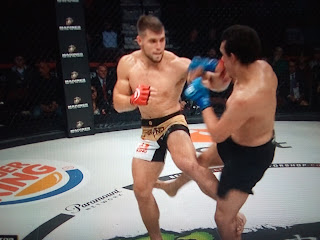 As I look for the words to put how dominant New Castle native Dalton Rosta has been in his combat sport career, I'll just leave it as that if Cleveland native Stipe Miocic didn't exist, then Rosta would probably be considered the baddest man in the rust belt between Cleveland and Pittsburgh.

After going undefeated as a heavyweight amateur boxer to go along with his perfect 7-0 amateur MMA record, the 23-year-old Rosta is now 2-0 in his pro MMA after his second round victory by ground and pound over previously undefeated Claude Wilcox of Hot Springs, Arkansas at the 205 pound weight limit in Uncasville, Connecticut at Bellator 231 this past Friday night.

Rosta dominated every aspect of the fight from the onset but Wilcox was a tough competitor and held on longer than most watching could had imagined.

"He had a strong chin that's for sure" said Rosta of his opponent to the media in his post fight press conference. "I like to inflict damage, I don't want to sound like a douche but that's why I'm in this sport, I do this sport for the love of it and the fun of it".

Posted by Youngstown Boxing at 5:11 AM