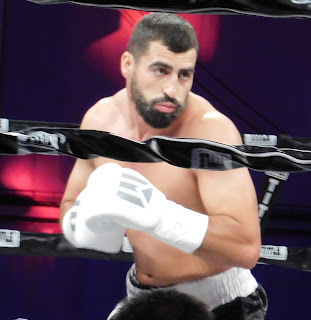 For many fighters a fight week might only come around two or three times a year, but for Youngstown's busiest pro fighter Danny Rosenberger, fight weeks have become the norm.

This will be the 11th bout for the 29-year-old Rosenberger who trains at Downtown Boxing Club in Youngstown and Combat Athlete in Howland since 2018 including his 5th bout of this year.

Rosenberger (6-7-4) will travel to suburban Chicago to Hammond, IN this Friday night to take on undefeated Chicago native Mikey Dahlman in a middleweight showdown at the Horseshoe Casino as part of the Midwest Boxing Showcase being promoted by 4 Champs Promotions.

Since Rosenberger is no stranger to road fights in an opponents backyard, he knows the added challenges that come with such bouts.

"It's going to pretty much be his home crowd so its not only fighting him but the crowd and the judges," said Rosenberger.  "I just got to fight my fight and not worry about what he's going to do but make him fight my fight".

While fighting on the road poses a harder obstacle to over come, Rosenberger uses it as his advantage to fuel his training.

"They have the advantage at home so if its close they are more than likely going to get the decision so that means I just got to train a little bit harder".

So how does Rosenberger kick his training up a notch?

On top of the work he puts in at Downtown Boxing Club, Rosenberger also spends a few days a week at Combat Athlete Performance Academy.

"Brian  Needham does unorthodox stuff with circuit training and breaking it down like boxing with three minute increments," said Rosenberger.  "It sort of stresses your body and you have to adapt to it and overcome it and your dead tired and you don't want to keep going but you just have to".

While Rosenberger has been pushing himself to the limits with his training, he might also have the edge in the bout with the superior competition he's been in the ring against.

Despite having an unblemished 8-0 record with 7 of his victories coming by way of knockout, the 27-year-old Dahlman has yet to fight an opponent with a record above .500 while taking on three opponents with zero wins.

On the flipside, Rosenberger has taken on eleven opponents with a .500 or better record including six with zero losses.

Though his last two fights were in the super welterweight and welterweight weight classes, Rosenberger feels that this bout at middleweight is a good weight for him which could also add to the road fighters advantage along with taking on superior competition.

One thing is for certain, win or lose you can expect to see Danny Rosenberger in the ring sooner than later.

"We'll fight this fight then hopefully we get one more time before next year".
Posted by Youngstown Boxing at 4:28 PM