Drew Smith victorious in Brook Park at War On The Shore 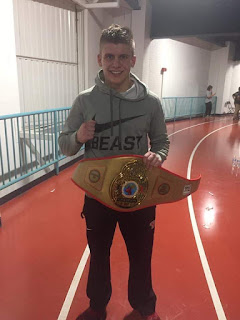 Local amateur Drew Smith continued his winning ways as the 20-year-old went to suburban Cleveland and defeated Nick Duganier in a middleweight contest.

Duganier came into the bout with a 10-1 record but the busy Smith was able to do enough to win the close decision and win a belt at the Brook Park Recreation Center.

Smith who trains at Burnside Boxing in Struthers is slated to be back in action on November 15th at the Showroom Lounge in Cleveland.
Posted by Youngstown Boxing at 9:47 AM