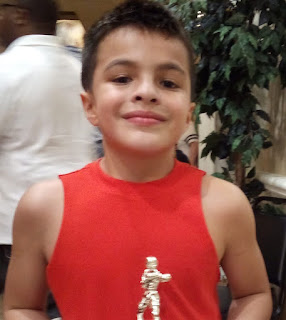 Anybody who has been through the doors of Jack Loew's Southside Boxing Club the past year knew they had a pitbull in the making in 8-year-old Javier Martinez.

Martinez, who wore a pair of trunks that were half stars and stripes and half Mexican flag, showed he belonged in the boxing ring from the get-go in his 65-pound debut matchup against Trayce Wright, also of Youngstown Saturday night at The Regency House in Austintown.

Wright, who pushed the pace early as Martinez kept finding an answer found himself against the ropes late in the second round as Martinez finished the round with a fury of punches to take the round.

Martinez carried the momentum over from the second into the third and final round as he had a counter for every punch Wright landed and eventually closed out the final round in the impressive fashion that he finished the previous round en route to the decision victory in a very entertaining and well-fought fight by both young fighters who will make their names known in the Youngstown boxing scene for years to come.

In the evening's main event which was delayed by nearly 40-minutes with a ring malfunction, Drew Smith of Burnside Boxing outworked Eron Powell of Norfolk, Virginia over the course of three rounds of their 160-pound bout to take the decision.

Smith fought a typical Drew Smith style of fight, keeping busy, pushing the tempo, and asserting himself as the aggressor while using his conditioning to never take a second of downtime over the duration of the bout.

Cunningham Jr, who is the son of former 2X IBF cruiserweight champion of the world Steve Cunningham, controlled the majority of the 150 lb. fight but Behun showed the ability to box with Cunningham and showed moments of controlling the fight.


Jake Lester, who trains under the watchful eye of Zack Page at Downtown Boxing Club took a fight against an opponent with a lot more experience because as area trainer and matchmaker Tom Cordell said, "Jake just wants to fight".

Lester hung around all fight against the more polished William Cannady of Virginia but in the end, the experience of Cannady was too much to overcome as Lester dropped a close-hard fought decision in the 170 lb. battle.