Scandy Vows That Dimuzio's Legend Status Is Over 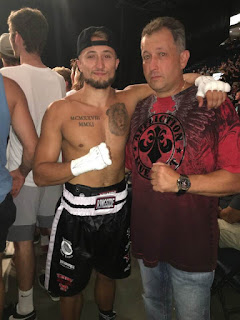 Tony Scandy and Tony DiMuzio might not be the young street fighting legends that everyone has heard about in the past anymore, but that doesn't make Saturday nights main event on Jack Loew's amateur show billed as "Once and for All" any less intriguing.

"The talk of us being enemies forever is just that, talk", said Tony Scandy.  "The fact of the matter is we used to be known for street fighting and if I had thirty-some knockouts then he might have forty-some and we were very good friends until a little family mishap took place that I won't get into".

So with their past troubles with the law and friendship behind him, Scandy views this as the best way to clear the air.

"It's better not to do this in the street and have both of us get thrown in jail," Scandy said of the upcoming match.  "We can go in the ring and try to knock each other out and walk out of there as friends again".

Though much of the hype surrounding Saturday night is his match against DiMuzio, Scandy was quick to point out two talented fighters from Jack Loew's amateur stable at Southside Boxing Club who will steal the show.

"I want to make sure that those who are planning out to come out get there early and support little 9-year-old Zion Hensley who will be opening the show with the first bout," said Scandy.

Hensley wasn't the only fighter Scandy had kind words about.

"Those who come will also be treated to a young man who's helped me get ready for this fight in Ashton Owens".  "Ashton is a great young man, works hard, and I look for him to be the next super star out of Youngstown".

While Scandy has spent some time when he can at Southside Boxing Club getting some work in with trainer Vinny O'Neill, he says he will owe his victory to his son who he dedicating the fight to.

"My son Anthony has helped me so much," said Scandy of his son who was a former football standout at Springfield Local before he fought in the Rough and Rowdy and is currently 2-0 as an amateur fighter.  "If it wasn't for him I would not be anywhere near ready for this fight and I just owe it all to him".

While Scandy knows his son will be in his corner he also knows that he will have plenty of family supporting him as well which is important to him.

"Besides my son who has helped me so much, I have to also dedicate this to my family which is the reason I am doing this in the first place".  "This is Youngstown and in Youngstown, no one crosses your family".

Scandy also said that this could open some doors for those 45-years old and over in the sport of boxing locally.

So how confident does Scandy feel heading into the match?

"DiMuzio's legend status is over and you can quote that," said Scandy.

Tickets for "Once and for All" which cost $20 will be available at the door which opens at 6:00 PM on Saturday at the Liberty Metroxplex with first bell slated for 7:00 PM.
Posted by Youngstown Boxing at 8:24 AM