Not So Little Z: Hensley Moving Up In Weight For Second Bout 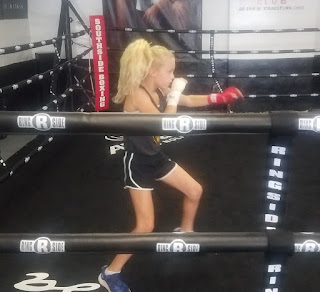 While Jack Loew will look to send summer out with a bang with his "Once and for All" amateur card at the Metroplex in Liberty this Saturday evening, the evenings first act will look provide some fireworks of her own.

Opening the evening will be 9-year-old Zion Hensley, known to many around the Youngstown boxing community as Lil' Z.

Hensley, a student at Western Reserve Elementary is shedding the Lil' Z moniker this fight as she will step up in weight for her second fight from 65 pounds to 73 pounds.

Though she's slated to take on a taller opponent who will be naturally bigger, Hensley, who won her first career fight in July by second-round TKO feels confident heading into the fight at a higher weight.

"I feel stronger," said Hensley who trains at Southside Boxing Club with Loew.  "As I added on weight I also added on more muscle".

The choice to move up in weight was an easy one for the young fighter who realizes to get local fights she may need to fluctuate her weight class from time to time.

"She had no hesitation when we asked her if she wanted to take a fight against a taller and bigger girl at a higher weight class, she just wants to fight," said Hensley's father Jason.

Though Hensley is looking forward to this fight, one that she says she's not as nervous for as she was the first one, she also has other thoughts in the back of her head.

"I'm getting excited for school to begin after the fair," said Hensley.  "I love learning".

The school year will have to wait for this little warrior however because it's time for her to showcase what she's learned from Loew and from all the homework she's been putting in outside of Jack Loew's Erie Street gym.

"I have my own little gym at my grandparent's house that I sometimes go to after the gym to get some extra work in," stated Hensley.

Tickets for Saturday night's amateur card will be available at the door for $20 with the doors opening at 6:00 PM and first bell slated for 7:00 PM.
Posted by Youngstown Boxing at 5:04 AM