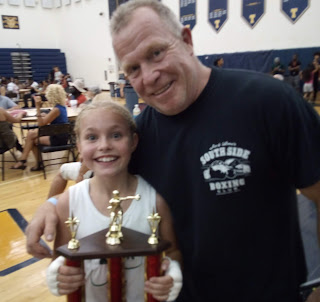 While most young kids have been enjoying their summer days doing everything they can to pass the time from going to swimming to beat the latest heatwave to catching lightning bugs in the evening,  Zion Hensley had other plans on how to spend her time.

The 9-year-old Western Reserve Elementary student has spent her summer like she has for nearly the past year, training like the champion she one day aspires to become.

After having her first planned fight fall through earlier in the summer, the 65-pound fighter who goes by the alias "The Celtic Kid" finally got the chance to showcase all her hard work last night at Tallmadge High School.

Hensley who trains under the direction of trainer Jack Loew at Southside Boxing Club while also receiving help from Cleveland prospect Willie Nelson had a debut that she will never forget in front of many friends and family who occupied the first two rows midcourt at the gymnasium. 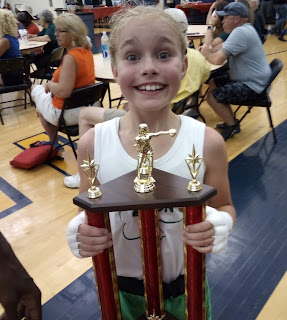 After a shaky opening moment, Hensley did everything she's been instructed to do over the past few months and turned the tide in a hurry and Loew had a simple explanation for that.

"She listens", said Loew.  "I told her what to do and with no hesitation she does it and that's something you don't see from a 9-year-old very often.

After her opponent, Phoenix Brownfield (1-2) of Saginaw, MI pressed the action early, Hensley flashed some pop in her punch and staggered her opponent and eventually scored a knockdown midway through the first round.

"It felt good, I knew she felt it," Hensley said of the punch that delivered the knockdown.

Like any boxer should, Hensley capitalized knowing that her opponent felt her power and went back on the attack and staggered her opponent backwards before the opening round came to a close.

"I was a little scared before the bell rang but once the bell rang I was ready," said Hensley of the opening round.  "After the first round, I was excited for the second".

While she may have been excited about the second round, she sure didn't get to enjoy it all that long as Hensley caught her opponent early and often forcing the referee to haul the action awarding her a TKO victory.

"It felt great just knowing I won", the young boxer said of having her arm raised in victory. 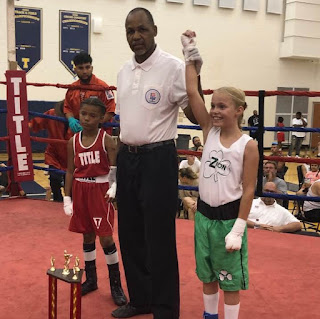 Hensley wasn't the only one overcome with joy in victory as her father, Jason who has been with her every step of the way was overcome with emotion.

"I felt I was in there with her," he said.  "I felt her fear, her nerves, the hits, I felt her struggle.  I felt the whole city win and our team win seeing Jack actually light up".

And beaming with pride and joy was Loew who was proud of his fighter.

"She did well and she worked hard and got what she worked so hard for," said Loew.
Posted by Youngstown Boxing at 9:14 AM