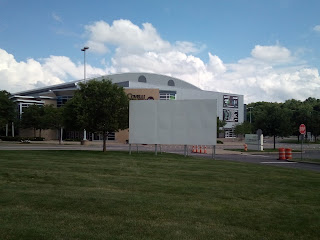 Boxing and cinema have always gone well hand in hand as movies about the sweet science have historically done very well at the box office, so it makes sense that Youngstown Summer Movie Series organizer and promoter, Aspasia Bernacki chooses to showcase a boxing movie every year since Youngstown has such a rich fighting tradition.

"I feel boxing is Youngstown's sport," said Bernacki who picked Creed 2 to show this upcoming Monday night.  "There is a huge history of boxing starting in the late 1800s until now.  I have always put a boxing movie in the lineup to honor that".

With Creed 2 being shown on the big screen on the front lawn of the Covelli Centre, Bernacki has lined up some special guests to further honor Youngstown's rich boxing tradition including former world champion Kelly Pavlik, current lightweight prospect Alejandro Popo Salinas and trainer Jack Loew from Southside Boxing Club.

Those attending the free event will be able to purchase popcorn, candy, and refreshments at an affordable price.

Here is a list of the remaining movies being shown in the Youngstown Summer Movie Series, which is now in its 10th year: