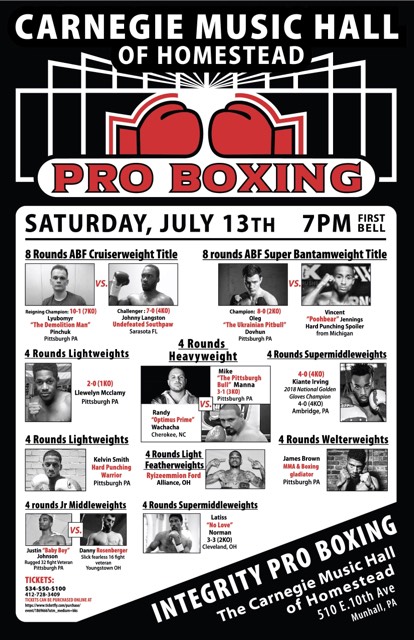 Tickets are now on sale for the Integrity Fighter Management promoted show to be held in suburban Pittsburgh on July 13 at the Carnegie Music Hall of Homestead.

Danny Rosenberger will be representing Youngstown on the card as the  29-year-old will be fighting for the fourth time in 2019 when he takes on Pittsburgh native Justin Johnson (6-20-6). 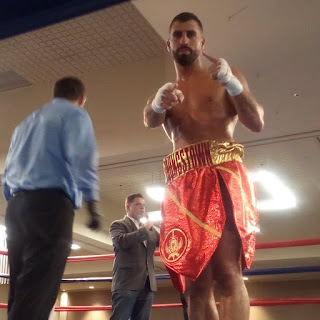 Fighting at this venue for the third time, Carnegie Music Hall will provide a comfortable setting for Rosenberger who scored a unanimous decision victory over Bobby Osterrieder his last time there in November of 2017.

Johnson, 30, will be fighting for the first time this calendar year after having a busy 2018 in which he fought six times against opponents with a combined 80-8-1 record.

The card will also feature the Ukrainian duo who now calls Pittsburgh home to train under the watchful of eye of Michael McSorely in 22-year-old cruiserweight Lyubomyr Pinchuk and 25-year-old super bantamweight Oleg Dovhun.


Pinchuk is currently 10-1-1 and will be defending his ABF Continental Americas Cruiserweight Title
against undefeated Johnnie Langston (7-0) of Sarasota, FL while Dovhun (8-0) will defend his ABF Americas Continental Super Bantamweight Title against the upset-minded Vincent Jennings (6-7-2) of Kentwood, MI.

Also slated to be in action is the pride of Alliance, Ryizeemmion Ford as the 1-0 25-year-old super featherweight will look to build off the momentum of his first-round TKO victory in his debut earlier this month against an opponent to be named later. 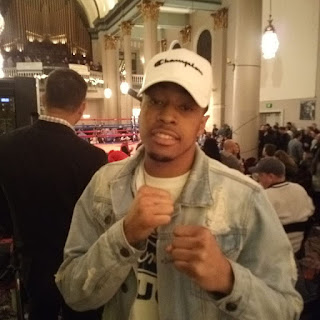 Tickets, which start at $35 can be purchased online by clicking here.

We will have more information on this card as bouts become official leading up to fight week and thank you to Michael McSorely of Integrity Fighter Management for allowing us access to cover the event.
Posted by Youngstown Boxing at 6:39 AM