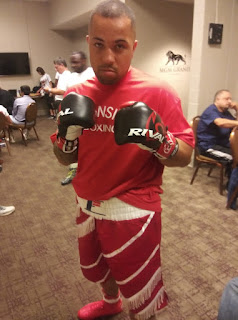 Daniel Infante got a taste of boxing on the big stage this past weekend as the 1-2 heavyweight from Youngstown who trains at Burnside Boxing and Fitness in Struthers appeared on the undercard of the Fury-Schwarz matchup at the sold-out MGM Grand Garden Arena.

Infante, 31, took on Philadelphia native Sonny Conto who is considered by many to be one of the top young rising stars of the heavyweight division.

Conto, 23, showed why Top Rank moved in quick to sign the bronze medalist in the 2017 National Golden Gloves Tournament and silver medalist in the 2018 edition of the tournament as he scored a second-round TKO victory over Infante to improve his record to 3-0 with all his victories coming by way knockout.

Though he walked away with a loss, Infante has shown the willingness to take on anybody who is put in front of him and learned a little bit about the waiting game that is being a swing bout on a championship-caliber card as his bout actually went off after the main event.

Infante's two losses have come from fighters with a combined 9-0 record.
Posted by Youngstown Boxing at 5:06 PM