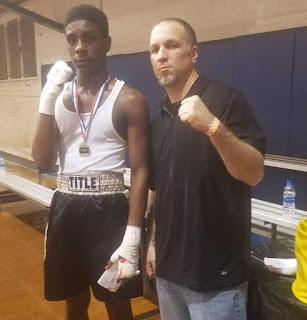 Tyrell Richards of Southside Boxing Club went into enemy territory and won his amateur debut by decision in Butler, PA this past weekend over Hayden Gregg of Butler Cubs Boxing Club.

"This was a great win for Tyrell", said trainer Vinny O'Neill.  "We got a chance to go out and fight in hostile territory for his debut which will help him for his upcoming fight in front of the home crowd on May 25th".

Richards, who fought at 130 pounds, seemed to enjoy playing the role of the villain.

"Tyrell kept telling me that I like being the villain between rounds", said O'Neill when asked how his fighter handled the opposing crowd.  "He was cool and confident the whole evening".

Winning his debut was huge for the 15-year-old youngster.

"I was really proud of how far he's come since the day he walked into the gym", said the O'Neill.

Richards is slated to fight this upcoming Saturday in Liberty at the Metroplex as part of Jack Loew's "Battle On Belmont" Pro-Am.

Tickets for the show will be available at the door which opens at 6:00 PM and start at $25.
Posted by Youngstown Boxing at 5:05 PM