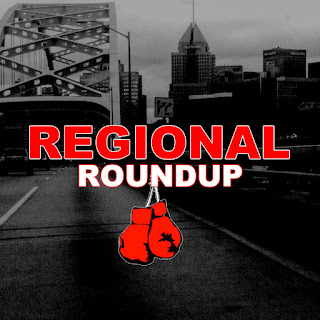 - Ukrainian Lyumbyr Pinchuk who now resides in Pittsburgh scored a brutal knockout victory over Anthony Trotter in Morgantown this past weekend as the up and coming cruiserweight improved his record to 10-1 with 7 of his victories coming by way of knockout. 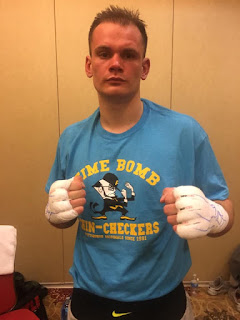 Pinchuk, 22, who trains under Michael McSorely Jr. has now won six consecutive bouts and will return to action in July at Pittsburgh's Priory Grand Hall in July.

- Cleveland super middleweight Latiss Norman also scored a victory in Morgantown as he won by unanimous decision over Edwynn Jones to improve his record to 3-3. 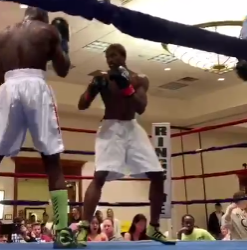 Norman, 26, has now won three consecutive matches and is also slated to fight in July in Pittsburgh at the Priory Grand Hall.

- The Pittsburgh area will be represented in its own backyard on the WFC promoted card at the Meadows Racetrack and Casino in the Pittsburgh suburb of Washinton.

Headlining the May 4th event will be one of the cities top prospects in super featherweight Matt Conway.

Conway, 23, is currently 16-0 and is quickly becoming a fan favorite.

Also slated to be on the card is Contender participant Morgan Fitch, and fan favorite Riche Cantolina.


- Pro boxing will return to Cleveland at the Agora Ballroom on May 11th as Thomas Mattice will headline an RB3 Sports promoted card that is slated to showcase talent from the Cleveland area.

Mattice, 28, will look to rebound from his first career loss the lightweight suffered back in February to Will Madera.

Also slated to appear on the card is Akron native Jose Rodriguez Jr. 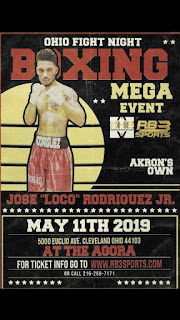 Rodriguez Jr., a 24-year-old middleweight, is currently 6-0 with 4 KOs and has recently been spending time in Las Vegas training with fellow Akron native Shawn Porter alongside his brother, undefeated super lightweight David Rodriguez.

- The Cleveland Golden Gloves will hold its finals this upcoming Saturday, April 13 at the Brook Park Recreation Center in Brook Park starting at 5:30 PM.

Admission for the event starts at $20 for general admission.

- The Western Pennsylvania Golden Gloves held its championships this past weekend at the Monroeville Sports Center.

The following champions advanced to this upcoming weekends Pennsylvania State Golden Gloves finals to be held at the Monroeville Sports Center: