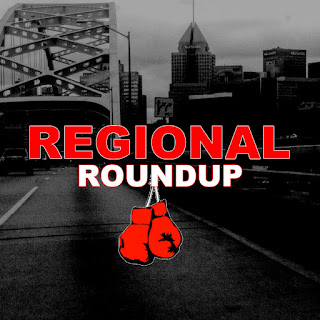 - Cleveland native, Terrell Gausha will step back into the ring on Saturday, May 25 in Biloxi, Mississippi as he will take on former WBA world super welterweight titlist Austin Trout (31-5) in a 10-round super welterweight contest at the Beau Resort and Casino.

Gausha, 31, is currently 21-1 with his lone loss coming in October of 2017 when the former Team USA Olympian dropped a unanimous decision to Erislandry Lara in a title fight for the IBO and WBA world super welterweight belts.

The bout will be televised nationally by FS1.


- Pro boxing will return to Pittsburgh this upcoming Saturday at the Meadows Race Track and Casino in the Pittsburgh suburb of Washington.

Slated to be in action on the WFC promoted card is Pittsburgh native and The Contender participant, Morgan Fitch (18-3-1).

Also slated to be in action is fellow Pittsburgh natives Justin Steave, and Richie Cantolina.

Tickets for the pro-am event can be purchased here.


- Cleveland will see some of its brightest stars step between the ropes as pro boxing will return to the city as RB3 Sports will set up a night at the fights at the Agora Theater.

More information can be found on the RB3 website here.


- Pittsburgh native Matt Conway (16-0) has a new fight date as the 23-year-old super featherweight will be in action at the old West Virginia State Penitentiary in Moundsville on June 1 on a Jim Frio Promotions promoted card.

Also slated to be on the card is Wheeling, WV native Eric Bledsoe (6-1-1) is also slated to be in action as the 29-year-old will fight for ABF Colonial Atlantic super welterweight title.


- The MGM Casino in Northfield, OH will be the site of a WFC pro boxing card on June 8 which will see the debut of Alliance native, Rhyizeemion Ford.


- Fans looking to get a boxing fix in NE Ohio can head out to Lorain next Saturday, April 27 as Steel City Storm II hosted by the Steel City Boxing Academy will take place at the Sacred Heart Church.

Bouts for the amateur event will begin at 5:00 PM.
Posted by Youngstown Boxing at 6:15 AM