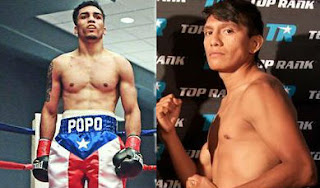 According to BoxRec.com, Alejandro Popo Salinas has his opponent for his first fight since suffering a unanimous decision loss to Uganda native Sulaiman Segawa (11-2) last March at the Palermo Center in Campbell.

Salinas, 24, is set to take on 31-year-old Mexican Pablo Cupul in a 6-round super featherweight contest in Atlantic City at the Showboat Hotel and Casino next Saturday, March 23.

Cupul (10-28), who now resides and fights out of San Diego is currently on a two-bout losing streak but is known for fighting very strong opposition.

This will be the first bout for Salinas under the Rising Star Promotional company.
Posted by Youngstown Boxing at 6:38 PM