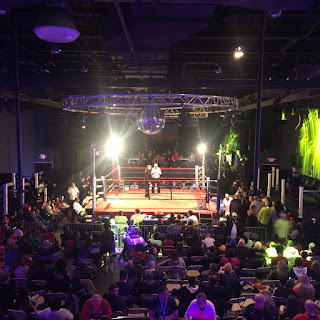 Boxing is alive and well in the Mahoning Valley and the packed standing-room-only crowd at Se7en Nightclub in Austintown reflected just that as fans were treated to an action-packed night of amateur boxing presented by Lights Out Management this past Saturday night.

Like any amateur card, this one had its problems as the fight card was shrunk from a slated seventeen bouts to eleven.

Though short in stature, the card that was ultimately was put together involving four local fighters didn't lack excitement or punching power.

The most exciting bout of the evening came during the first fight involving a Youngstown fighter as Austin Gibson picked himself off the canvas early int he second round and battled back to squeak out a close decision against Jakob Condon of Canton in a 164 lb. matchup.

Gibson, who trains at Burnside Boxing turned the tables immediately after being knocked down as he came back to dominate the second round of what became a three-round slugfest that drove the crowd to their feet on several occasions.

With the victory, Gibson improved to 2-1 while Condon saw his record even up at 1-1.

Youngstown's Downtown Boxing Club got in the win column as  Andre Henderson scored a first-round knockout.

Henderson, who was making his debut, connected with a mean right hand causing his opponent, Lance Bass (0-3) of Cleveland to hit his head hard off the mat which forced the referee to put a halt to the 190 lb. match at the 1:40 mark of the bout.

In the evening's main event, two Youngstown fighters went toe to toe in an exciting 145 lb. match between two of the areas top amateurs.

Nate Cordova of Burnside Boxing was able to ride the wave of a strong second round to secure a victory over Nate Willingham of Downtown Boxing Club.

While Cordova landed at a higher rate, Willingham was kept coming forward in the exciting match which saw Cordova put Willingham on the canvas late in the third round to seal the decision victory.

With the victory, Cordova improved to 7-3 while Willingham saw his record drop to 6-2.

Lights Out Management will return in the summer with a planned outdoor show at Southern Park Mall.