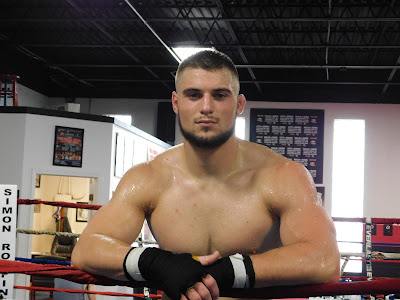 Anyone who has seen Dalton Rosta fight, whether in a cage or in the ring knew that the 23-year-old New Castle native had the makings to be a superstar.

Rosta, who fights as a light heavyweight in the cage just took a huge step forward to reaching stardom as the highly touted undefeated prospect has signed on with Bellator MMA according to FloCombat.

Known as a knockout artist, Rosta is 7-0 in MMA with all his wins coming by way of knockout while also maintaining an undefeated record as an amateur heavyweight boxer.

Stay tuned to Youngstown Boxing News as I hope to get an interview with Rosta in the near future.

Posted by Youngstown Boxing at 6:09 PM