Made Men Promotions has been known to put on great boxing shows and this past Saturday night was no different as a capacity crowd in the Ballroom at Mountaineer Casino and Resort were treated to an entertaining night of boxing.

While the crowd was left satisfied with the action in the ring, Youngstown native Danny Rosenberger was left with disbelief after he seemingly outworked his opponent over the duration of their four round super welterweight contest only to hear the fight was scored a majority draw.

Rosenberger went to work early and took control when he backed Washington, D.C. native Lenwood Dozier into a corner and landed a series of the body of Dozier (10-21-3). 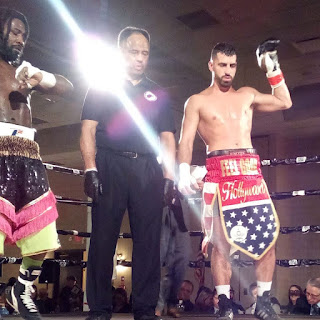 Over the course of the fight, Rosenberger seemed to be in control as he stayed defensively strong while firing off and landing combinations.

Rosenberger (4-6-4) had Dozier wobbled a few times, including in the third round when he landed a hard straight right to the head of Dozier snapping his head back.

"I'm very disappointed in the decision," Rosenberger said postfight.  "I had him hurt a few times and landed the much cleaner and clear shots.  To me, I  feel like outboxed him".

Though he was disappointed, Rosenberger vowed to let the judge's decision add fuel to his fire.

"I just can't leave it in the hands with these judges anymore," said Rosenberger.  "This just motivates me to go back out there and work even harder than I have been.  I'm not done and I'll be back".

In the evening's main event, Pittsburgh native Matt Conway stayed perfect and improved his record to 16-0 with a hard-earned eight round unanimous decision victory over Zacatecas, Mexico native Jose Martinez (11-17).

Though he got had to work hard in a match which saw both fighters countering well and landing body shots at a high rate, Conway saw plenty of positives in the victory while showing nothing but respect to his opponent. 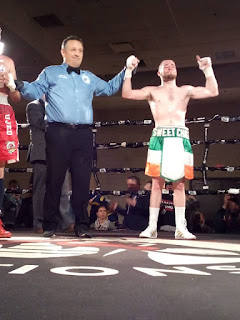 "My opponent was tough and now I'll have the experience to know what it's like to go into the later rounds with an opponent who can stick with me punch for punch," said Conway.  "I won't be shaken or caught off guard by someone who's matching me in the later rounds".

Though his opponent had his fair share of bright spots over the course of the 8 round super featherweight contest, Conway had no fear in a decision going against him despite a few questionable decisions earlier in the evening.

"I was confident I boxed well enough for the judges to clearly see I won," said Conway who is a student of the sport and plans to get back into the gym as soon as possible.

"I'll have a few days to rest then I'm right back in the gym while everything is still fresh in my head like the things I need to work on, the things I did well, and what I need to do better as well as things I didn't do what I should have done," stated Conway.  "I think we're going to work on turning angles more after this fight, they worked well so I want to get better at it".

While Matt Conway walked away victorious, his older brother Mike fought to a four round draw in what may have been the evenings most entertaining bout.

Conway, who was coming off of an 8-month layoff from the ring for a shoulder injury overcame a slow start and seemed to do enough to defeat David Pena of Odenton, Maryland in the lightweight showdown. 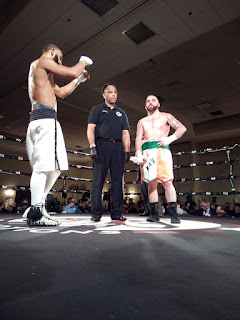 Conway, who had a strong second and third round despite his opponent dancing and taunting sustained a cut in the early stages of the fourth round which he later needed stitches on.

"The cut happened right in the beginning of the fourth round either from a headbutt or an elbow," said Conway.  "I felt it dripping and knew I was cut and honestly that was the first cut I've had.  As the round went on it clouded my vision a little so I just tried to close the eye and deal with it".

Though he was bloodied and disappointed with the decision, Conway remained upbeat knowing the fans got their money worth.

"It was a tough and entertaining fight," stated Conway.  "I feel I started to hit my groove in the last round.  It was hard to get comfortable and readjust every few seconds but I thought I squeezed it out three rounds to one just by pushing the fight.  I was a little disappointed but the crowd was pleased with the fight and they voiced their opinion on the decision so that's all I needed".

One fight that didn't end with a judging controversy was the complete destruction which Elwood City native Rosalindo Morales put on his opponent, Cleveland native Jeremy Abram (2-2) in the evenings co-feature. 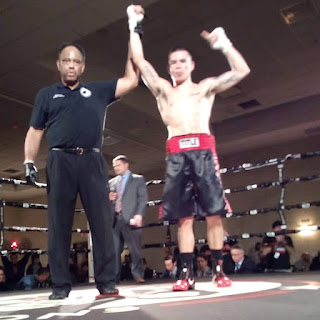 "The first couple of rounds I was trying to figure out my opponent because he was taller than I was", said Morales of his performence.  "Other than that I was just trying to fight my fight and control the fight the best I could".

With the crowd squarely in his corner, Morales eventually figured out the taller Abram and outclassed him for the duration of their 4 round super lightweight which appeared close to earning a stoppage late in the fourth round when Morales appeared to hurt Abram.

Morales was quick to give thanks to the huge crowd that made the roughly one hour trip from Ellwood City to New Cumberland, WV.

"The crowd being there for me really helped me out and boosted my confidence a lot", said Morales when asked what role the crowd played in his performance.

While he plans to enjoy the victory with his family, Morales was quick to mention that he plans to be back in the gym sooner than later.

"It won't be long until I'm back in the gym," stated Morales.  "I want to enjoy the days with my family but I will get to the gym as soon as possible".

Posted by Youngstown Boxing at 7:29 PM