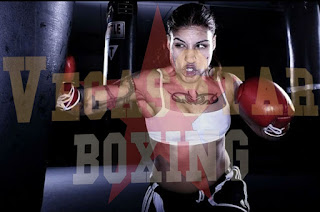 Former Youngstown resident Bill Nelson has been busy since teaming up with Las Vegas lawyer Marvin Simeon earlier this year to form Vegas Star Boxing as the pair has been building a strong stable of hungry fighters who all have the fire and desire to become world champions.

Nelson, who has lived in Las Vegas since 1983 when he relocated after falling victim to the economic hardship which hit Youngstown hard with the collapse of the steel mills, and Simeon just added a huge piece to their roster in signing former seven-time world champion female boxer, Melissa Hernandez.

Hernandez, 38, who currently lives in Miami Beach, Florida after calling the Bronx, NY home for most of her life after relocating from her native Peurto Rico, rose to stardom in 2006 when she captured the vacant WIBA world super bantamweight title in her seventh pro fight when she scored a decision victory over Lisa Brown.

So while many in her position would feel they have nothing left to prove, Hernandez feels the timing was right for a comeback with stars like Claressa Shields, Katie Taylor, and Christina Taylor bringing attention back to the sport like Christy Martin and Laila Ali did in previous years.


"I got bored," said Hernandez in a phone interview.  "I got bored sitting around home and right now is a perfect time in women's boxing to make a comeback".


So how did the former champion who sports a career record of 22-7-3 end up with an up and coming boxing promotion company?

"A mutual friend in Simon [Ruvalcaba] pointed me in the direction of Bill and Marvin and I said let's do this".

While she has not been in the ring for roughly 2 and a half years, Hernandez never fully considered herself retired.

"I've been sparing every other week and almost took some fights in the Bahama's but those fell through," said Hernandez.  "Sometimes its so impossible to fight with everything that goes on behind the scenes that the fans don't know about".

So now that the ink is dried and she has Vegas Star in her corner, Hernadez is ready to get under the lights again.

"It's time to get the ball rolling, maybe start back with a 6 to 8 round fight", said Hernandez of she plans on easing back into the ring.  "I'm just ready as seeing these girls with padded records winning world titles has been such a motivation to me to come back and win another title".

Currently, Vegas Star has assembled a strong stable of fighters from all over the United States as well as globally including one of the top prospects in Africa in 17-0 super featherweight Oluwaseun Joshua Wahab and Alliance, Ohio native Rhyizeemion Ford who is set to make his pro debut in the near future.
Posted by Youngstown Boxing at 6:53 AM