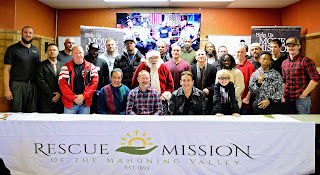 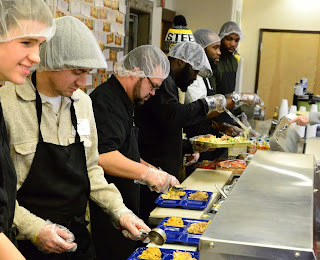 Joining the legends of yesterday were a handful of current pro fighters from the region including  Darnell Boone, Vinny O'Neill, Anthony Taylor, Anthony Congemi, John Gregory and Willie Nelson.

The pros were not the only ones who got involved as a handful of amateurs from Southside Boxing Club, including trainer Jack Loew were on hand to show support for the cause and to interact with the youth at the mission.

Those fighters who volunteered their time to the event, which was organized by mission volunteer Jason Elliot, were given a private tour of the facility and served lunch.

Those who were unable to attend this afternoon but still want to donate can do so by visiting www.moveourmission.org.

A special thanks Century 21, and Livin for Livi for helping sponsor the event and to Jennifer Sharp of Southside Boxing Club for her assistance in putting on such a phenomenal event.
Posted by Youngstown Boxing at 2:07 PM