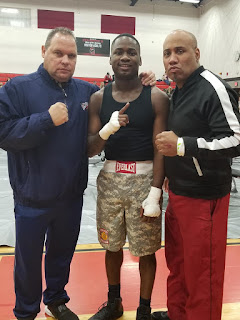 Feeling as if he got slighted by the hometown judges in Pittsburgh on Friday night, Brian Sims of Downtown Boxing Club made sure the judges would be a non-factor as he climbed back into the ring the next night in Akron.

Sims, 24, was relentless in his pressure on Terry Demore of Erie Kombat as the Euclid native who attends Youngstown State University forced the referee in charge to wave off the fight midway through the opening round of the 160-pound bout at Springfield High School.

Another local fighter in Ashton Owens of Southside Boxing Club was in action at Springfield High School on Saturday night as well.

Owens fell by decision to Darrian Willz of FFLA in a 178-pound bout.

Sims took a loss on Friday night in downtown Pittsburgh on a Cleveland vs. Pittsburgh amateur show as he lost a close decision to Pittsburgh native Paul Palumbo.

With his win on Saturday night, Sims improved his record to 17-9.

Posted by Youngstown Boxing at 12:21 PM