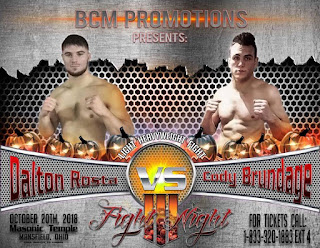 Dalton Rosta is ready to mix it up for the first time since July, and this time it will be in the cage as the nationally ranked New Castle native will put his undefeated record on the line next Saturday, October 20 in Mansfield.

Currently ranked #1 in the amongst US Midwest amateur light heavyweight MMA fighters, Rosta holds a 6-0 record with all his wins coming by way of knockout including a second-round victory his last time in the cage on July 14 at the Rivers Casino in Pittsburgh against Philadelphia native Devon Williams.

Next in line to try and stop the 22-year-old Rosta who is also a perfect 6-0 as an amateur heavyweight boxer having scored a TKO victory his last time in the ring in August is Cody Brundage of Michigan.

Brundage, 24, is a former two-time NCAA qualifier in Division 2 wrestling from Newberry College and currently holds a 3-1 record in MMA.

"I know he's going to try and use his striking to set up his takedowns, but that' not going to work against me," said Rosta said of Brundage.

While Rosta is proud of his success and the work he's put in to achieve it, he's now seeing the flip side of being so successful which has contributed to his two-month layoff from fighting.

"It's getting harder and harder to find fights," Rosta said of his regional and national rankings.  "We got to find the top guys who just don't care who they get in the ring with".


"Nichole is a matchmaker in Ohio for this region who has done a really good job finding me fights. She's found me my last three fights including this one" said Rosta.

Rosta and Brundage will meet on the BCM promoted card at the Masonic Temple in Mansfield.  Tickets can be purchased by contacting 1-833-320-1883 EXT. 4.

Posted by Youngstown Boxing at 2:24 PM