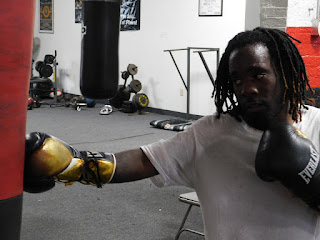 Though Anthony "Tiger" Taylor has been at Southside Boxing Club training steadily over the past year with trainer Jack Loew, the 27-year-old is about to enter the ring for the first time since suffering a TKO loss to Santos Vasquez in Reno, NV in May 2017.

Taylor, who will be looking to end a two-match losing streak, is slated to take on Ukrainian native Oleg "The Ukrainian Pitbull" Dovhun on August 18 in a pro-am card being promoted by Integrity Fighter Management at the historical Priory Grand Hall in Pittsburgh.

Dovhun, 24, who now resides and trains in Pittsburgh at the Conn-Greb gym under the watchful eye of his promoter and trainer, Michael McSorley is currently 5-0 with two of his victories coming by way of knockout while Taylor will come into the scheduled 6-round bout being fought at super bantamweight with a 4-2 record.

"My guys go up to Youngstown for sparring for a reason.  It's a tough town with great people and fighters" said McSorley about Dovhun fighting an opponent from nearby Youngstown.  "Youngstown fighters don't duck anyone and neither do guys in my stable, this is an old-school backyard brawl and we need more of these in the area".

Despite Dovhun only having 5 professional bouts on his resume, ring experience is not lacking for the five-time Ukrainian national champion who amassed 347 amateur bouts in his native country and fought for the famed elite Ukraine Ottoman boxing team in the World Series of Boxing.

"Taylor has a great amateur pedigree and so does Oleg" McSorley said about the upcoming co-feature bout.  "Oleg's the meanest, most intense fighter I have ever worked with and has a very fitting nickname".

While Dovhun has been a pleasure to work with for McSorley, the trainer/promoter also had praise for Team Taylor and manager John Loew in making this bout happen.

"John [Loew] is extremely professional and has been great to work with.  We have a ton of respect for both their gym [Southside Boxing Club] and Downtown Boxing Club." stated McSorley.  "We know we are in for a fight".

Tickets for the event start at $30 and can be purchased here.

Stay tuned to Youngstown Boxing News for more information as the fight date approaches as we will be interviewing Anthony Taylor in the near future.

Posted by Youngstown Boxing at 1:59 PM