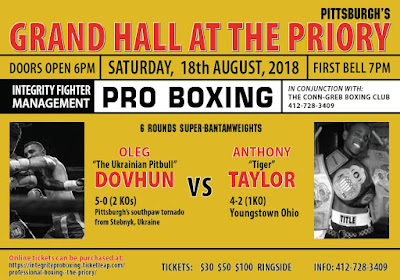 Taylor took the undefeated Dovhun who now lives and trains in Pittsburgh the distance in their six-round matchup at the historical Priory Grand Hall in Pittsburgh.

While Taylor (4-3) has been inactive for over a year since his last fight in May of 2017, the 27-year-old Youngstown native proved he belongs back in the ring.

Taylor is slated to be back in action in November in Youngstown at the Palermo Center in Campbell on Thanksgiving Eve.
Posted by Youngstown Boxing at 6:09 PM