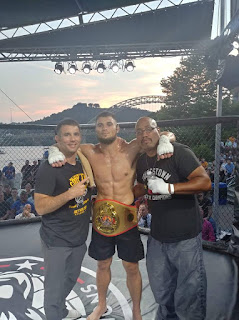 Dalton Rosta predicted a first-round knockout victory in his bout last night at the Rivers Casino in Pittsburgh as part of the first-ever MMA card put on by Made Men Promotions, and his prediction was off by only off by a few seconds.

Rosta used his superior strength and skill to almost end his overmatched opponents night in the opening round, but the clock was on the side of 32-year-old Philadephia native Devon Williams who survived to see a few seconds of round two.

Within moments of the second round, the 22-year-old Rosta wasted no time dropping the previously undefeated Williams to the ground with a hard right hand and pounding him until the referee halted the action of the light heavyweight matchup.

"He was tough in the first round," Rosta said of Williams.  "After a few minor mistakes I made early in the opening round I figured him out and I knew I had him".

"I hit a double leg at the end of the first round and the bell saved him soon after", continued Rosta.  "I knew I was going to finish him in the next round and I jud just that after I dropped him with a right hand".

Rosta, who hails from New Castle, improved his record to 6-0 with all his victories coming by way of knockout, and he is proud of that statistic.

"It felt great getting the win as always as there is no better feeling than getting your hand raised at the end of the fight," said Rosta.  "But it makes it even better when it's by knockout, and every single fight has been".

His winning ways don't stop in the cage, however.

Rosta will now turn his attention to the boxing ring where he is an undefeated amateur heavyweight as he will be fighting in World Fighting Championships pro-am at the Meadows Casino in suburban Pittsburgh on August 4.

Posted by Youngstown Boxing at 7:29 AM