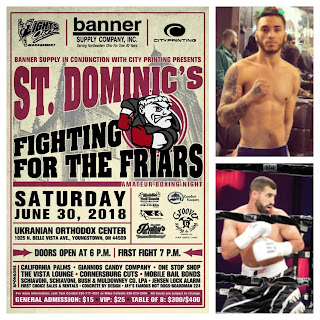 Youngstown has seen the weather hit 90-plus degrees the past few days, but as the weather continues to heat up so is the boxing scene in the city at both the professional and amateur levels.

Two Youngstown professionals have matches lined up according to BoxRec in the coming months this summer.

Alejandro Popo Salinas (9-2) will be first up when he heads to the Hollywood Casino in Columbus on July 28th to take on 24-year-old Hakeem Watkins (6-3) of Whitehall, OH in a scheduled 8-round lightweight matchup.

Salinas, 23, will be looking to get back in the win column after his shocking unanimous decision loss in his own backyard at the Palermo Center to Uganda native Sulaiman Segawa in March.

Danny Rosenberger (3-4-3) will be the next to step into the ring this summer when he heads to Pittsburgh on August 11th at the Rivers Casino and does battle for the fourth time in 2018.

Rosenberger, 28, who has won 3 of his last 5 bouts and fought to a draw in another, will be taking on 29-year-old Eric Bledsoe of Wheeling, West Virginia in a scheduled 6-round super welterweight contest on the Made Men Promotions promoted card.

Lights Out Managment will once again be providing entertaining nights of amateur boxing for a good cause as they have two shows lined up this summer.

The first amateur card which is being billed as "Fighting for the Friars" will be held next Saturday, June 30th at the Ukrainian Orthodox Center in Youngstown with proceeds from individual tickets sales, 50/50, and the Chinese auction will go to St. Dominic Catholic Parish.

Lights Out Managment will return on July 28th to support another worthy cause which will be named at a later date with a show in Niles at Johnny K's Power Sports.
Posted by Youngstown Boxing at 6:32 PM