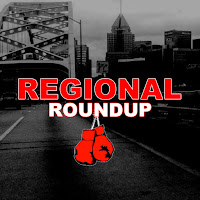 Pittsburgh Area
- One of Pittsburgh's top young professional prospects took a huge step forward this past Friday night at The Rivers Casino in Pittsburgh.

Matt Conway, 22, improved his record to a perfect 13-0 and captured the IBA Intercontinental lightweight championship by scoring a 10-round split decision victory over Mexican native Arturo Santos Reyes.

Conway will be back in action when pro boxing returns to The Rivers on August 11th.


- Pittsburgh will be buzzing with pro boxing events in August as three events are lined up on consecutive weekends.

The 27-year-old Mattice made quick work of Hondorus native Jorge Mungia (13-13) and displayed his power in both hands.

Mattice, who improved his record to 13-0 sent Mungia to the canvas on two occasions in the opening round before the referee waved the bout off at the 2:30 mark of the round.

- Another one of Cleveland's top rising stars, Montana Love will be in action this upcoming Saturday in Toledo at the Seagate Convention Center.

The 23-year-old super lightweight will be taking on Sulaiman Segawa in a very interesting matchup.

-  Canton welterweight Antonio Castillo Jr. will look to stay perfect when he takes on Sharad Collier at the Xfinity Theater in Hartford, Connecticut this upcoming Saturday.

Castillo, 31, scored a knockout victory over James Brown in his debut a month ago in Pittsburgh while Collier will be making his professional debut.

Posted by Youngstown Boxing at 3:38 PM