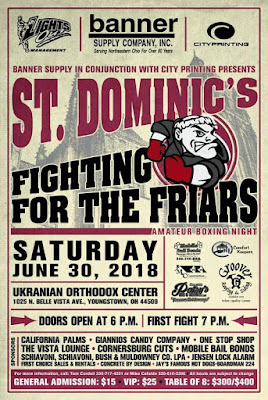 Lights Out Managment will hold the first of their two summer amateur boxing events this upcoming Saturday, June 30 at the Sts. Peter and Paul Ukrainian Orthodox Banquet Center located on the west side of Youngstown.

Saturday's event is billed as "Fighting for the Friars" and will benefit Youngstown's St. Dominic's Catholic Church as all proceeds from individual ticket sales, 50/50, and Chinese auction will go to the church.

Though putting together this card presented a challenge for area matchmaker, and trainer Tom Cordell, he is pleased with the matches he has lined up so far.

"With the Junior Olympic finals going on in Charleston [West Virginia] the same weekend we lost some guys who would normally be fighting", said Cordell when I spoke to him on the phone last week.  "But once everything is finalized it's going to be a very good night of boxing".

Regardless of how the bout sheet appears when its all done and finalized, the real winners will be St. Dominic's Church who will be benefiting from another strong effort from Lights Out Managment to raise money for notable and worthy causes throughout the Mahoning Valley.

Lights Out Managment will return on July 28th to support another worthy cause which will be named at a later date with a show in Niles at Johnny K's Power Sports.

Posted by Youngstown Boxing at 11:39 AM