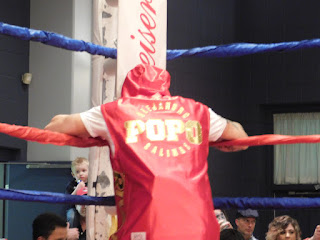 Alejandro Popo Salinas (9-2) will climb back into the ring next month for the first time since his shocking unanimous decision loss in his own backyard at the Palermo Center to Uganda native Sulaiman Segawa in March.

The loss in March was the second in the career of the 23-year-old Salinas who was on a 6-match win streak and coming off a huge national television victory in Las Vegas against previously undefeated Duarn Vue in September.

Salinas, who had bouts fall through in both May and this month, is now slated to take on 24-year-old Hakeem Watkins of Whitehall, OH on July 28th in a scheduled 8-round lightweight contest at the Hollywood Casino in Columbus according to BoxRec.

Watkins (6-3) will be stepping into the ring for the first time since scoring a knockout victory over Glenn Mitchell in August 2017.

Stay tuned to Youngstown Boxing News for more information as bouts are always subject to change at the drop of a dime.

Posted by Youngstown Boxing at 4:25 PM