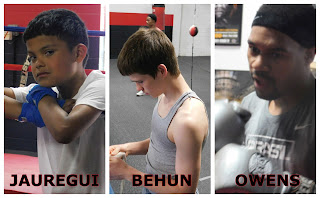 Trainer Vinny O'Neill of Southside Boxing Club will have a busy weekend as he will cross the border into Pennslyvania with a handful of amateurs on two occasions this weekend for shows on both Friday and Saturday nights.

Making the trip to the Sokol Club on East Carson Street in Pittsburgh with O'Neill on Friday night will be 9-year-old Juan Jauregui (5-5) who will be taking on Shamus Stanton of Pittsburgh.

A trio of boxers from Southside Boxing Club will be in action the following night in Butler, PA at Cubs Hall, including Jauregui who will be taking on Solja Cook of Pittsburgh in a rematch of their December 15th match which saw Jauregui win a close decision.

Ashton Owens (5-1) will be fighting for the first time since suffering his career loss in the novice championship in the 178-pound weight class at the Cleveland Golden Gloves last month.

Jackson Behun, 15, will also be in action looking to get back in the win column and improve on his 8-8 record in the 138-pound weight class.

O'Neill will keep the amateurs at Southside Boxing Club busy the following week with a fight card in Cleveland.
Posted by Youngstown Boxing at 11:46 AM