Jauregui Wins in Butler to Split the Weekend 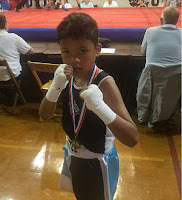 Juan Jauregui of Southside Boxing Club got back in the win column as he defeated Solja Cook of Pittsburgh for the second time in 5 months with a split decision victory in a 70 Lb bout at Cubs Hall in Butler, PA on Saturday night.

Jauregui, 9, evened his record to 6-6 with the victory after falling the night before on Friday in Pittsburgh in a highly controversial decision which saw the judges awarding the victory to the hometown fighter, Shamus Stanton.

Joining Jauregui in action in Butler was Ashton Owens who also trains at Southside Boxing Club under trainer Vinny O'Neill.

Owens lost a split decision to Orlando Ellis of Johnstown, PA in a 178 Lb matchup to see his record slip to 5-2.

Posted by Youngstown Boxing at 7:32 PM