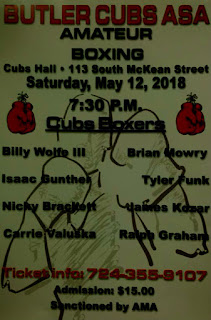 Twelve bouts are scheduled and will include a handful of debuts and rematches from the Western PA Golden Gloves.

The event will also include plenty of great concession options and a 50/50, and baskets for a Chinese Auction.

The first bell for the event, which will have $15 admission, is slated for 7:30PM.

Ashton Owens, Juan Jauregui, and Jackson Behun from Southside Boxing Club are slated to have matches on the card.

Posted by Youngstown Boxing at 3:49 AM