6:30PM - We are about 30 minutes away from first bell and I'm all set up at ringside at The Regency House in Austintown.  I'm Hearing that we are down to abotu 13 bouts so I will try to make corrections as to what matches will not be going on.  This is the norm at amateur boxing shows, guys no-show, and get injured or claim injuries.

Youngstown native and former IBC champion, Craig Snyder is on hand signing copies of his book on the history of pro boxing in the great city of Youngstown. 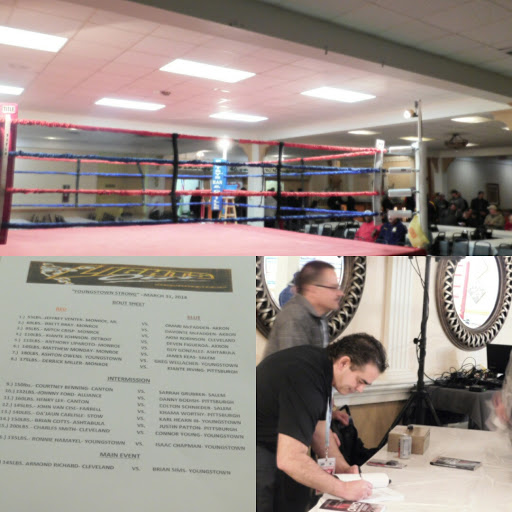 7:18PM - Still waiting for this thing to get started.  USA boxing jodges have taken position around the ring and the ring announer, Jeff Ondash is on hand.  Hoping we are only moments away from the National Anthem and getting this bad boy started.

7:22PM - Four fights have been scratched bringing the total numbr of fights to 13 and fight #1 and #3 have been swapped to avoid a referree reffing his own kid (Akim Robinson).

7:30PM - Mitch Crisp of Monroe, MI and Akim Robinson of Cleveland get the action started for the night in the 95-pound weight class. 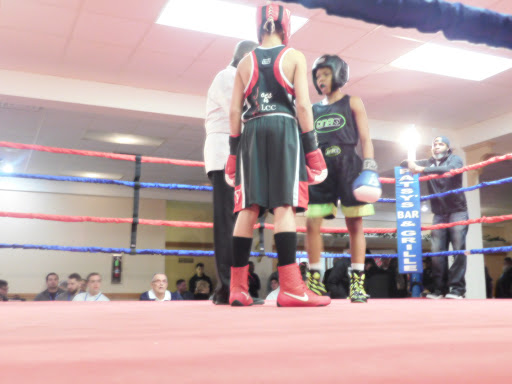 8:08PM - Deven Figueroa of Akron scores a decision victory over Kiante Johnson of Detroit.  Next up will be the first bout involving a Youngstown-area fighter as James Keas is set to take on Matthew Monda of Monroe, Michigan.

8:22PM - James Keas of Salem falls by decision to Matthew Monday of Monroe, Michigan in a bout that saw both guys draw some blood in the 145-pound weight limit.  Keas fought hard, and the fight could had gone either way. 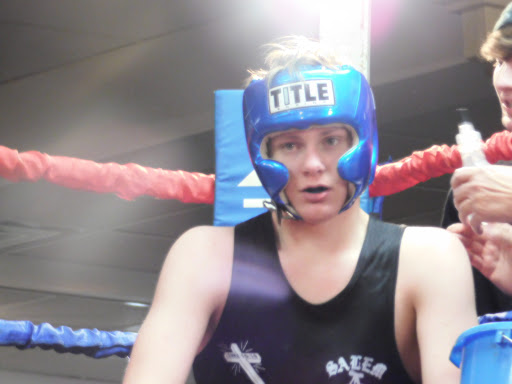 8:35PM - The packed house at The Regency House was just treated to an amazing match as the nation's #2-ranked light heavyweight, Kiante Irving of Beaver Falls/Pittsburgh, PA took on Derrick Miller of Monroe, Michigan a former Golden Gloves Champ in his state.  Both fighters landed nice blows but Irving scored the TKO in the final round at the 2:19 mark. 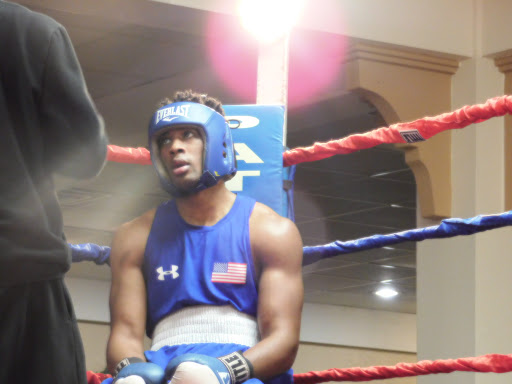 INTERMISSION
Lot's of former and current Youngstown greats gathering in the ring. 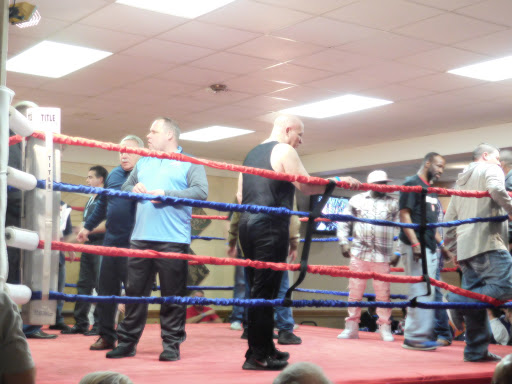 9:09PM - In the first fight post-intermission Courtney Benning of Canton scores a third-round TKO at the 1:20 mark of the round over Sarrah Grubber (pictured below) of Salem. 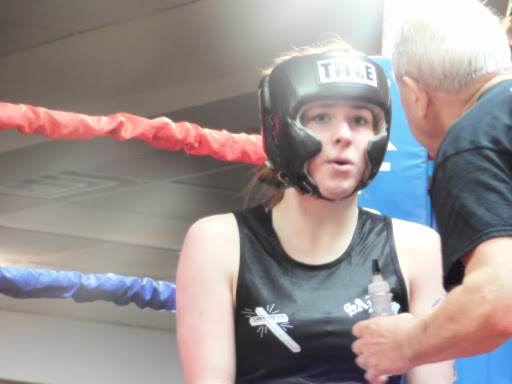 9:30PM - Johnny Ford of Alliance defeated Danny Bodish of Pittsburgh in a 132-pound contest in what may have been the best fight of the evening.  Next up is Colton Schnieder of Salem who fought last week at the Southside Boxing Club Pro-AM.  We have 5 fights remaining, all of which will involve a fighter from the Mahoning Valley.

9:40 - In the 160-pound weight limit Henry Lee of Canton scores a TKO over Colton Schnieder of Salem at the 1:39 mark of the third round.  The fight was very competitive until the final round when Lee pulled away.

9:55PM - In the 140-pound weight limit, Da'Jaun Carlisle of Stow defeats Karl Hearn III of Youngstown in a fight that started slowly in the opening round but ended up being a pretty solid, action-packed fight.  The fight could had gone either way but Carlisle pulled away in the final round. 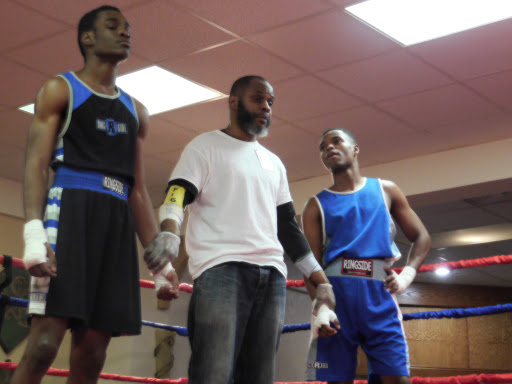 10:10PM - We just had a great heavyweight showdown as Charles Smith of Cleveland and Connor Young (below) of Youngstown battled for three rounds trading blows in what very could be the fight of the night.  Connor young scored the split decision victory. 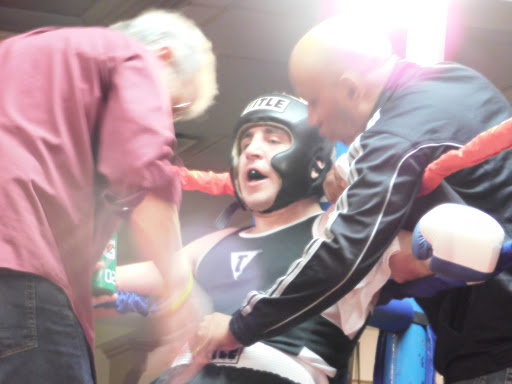 10:25PM - Two Youngstown fighters got it on in the 135-pound weight class as Ronnie Hamayel (below) scored two knockdowns in the second round to help secure a victory over Isaac Chatman who was returning from a long ring layoff.  Hamayel is trained by Dickey Greene.  We move onto the nights main event, Brian Sims of Youngstown vs. Armond Richard of Cleveland. 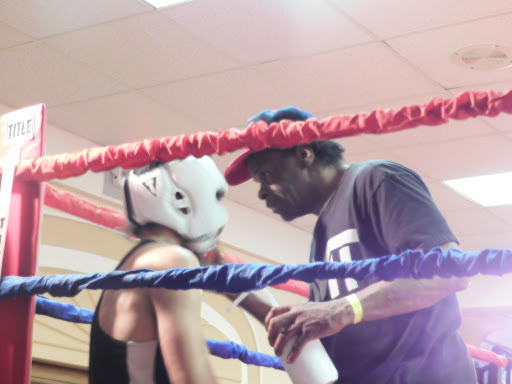 10:40PM -  In the main event, Armond Richard of Cleveland scored a decision over Brian Sims of Youngstown in the 135-pound weight limit.  Both fighters fought a great fight but Richard kept the pressure on and landed more and better punches especially down the stretch. 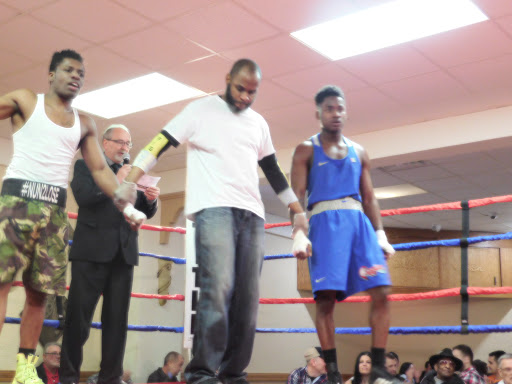 Fighter of the Night award goes to Connor Young. 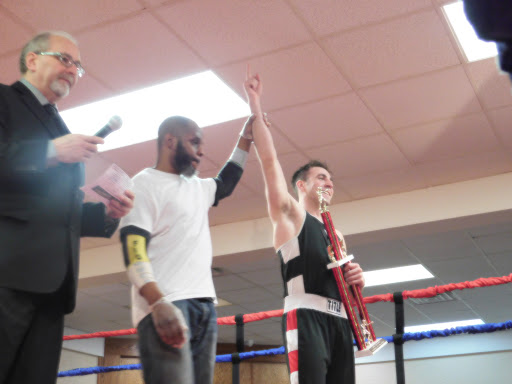 That's a wrap from The Regency House.  Have a safe and pleasant holiday, everyone.
Posted by Youngstown Boxing at 9:19 AM