The last time we saw amateur Isaac Chatman in the ring, he not only looked sharp in earning a one-sided decision over Zi Stalnaker of Akron but he also took home the Fighter of the Night Award.

That was was roughly six months ago, however.

Chatman will make his return to the ring this Saturday evening at the Regency House in Austintown as part of Lights Out Management's Youngstown Strong amateur event that will raise funds in the name of John Grace and Bob Gorvet for scholarships through the Youngstown Class B league.

"It feels good," said Chatman who trains at Downtown Boxing Club of his return to the ring. "I'm nervous but excited".

The time off for Chatman, who is slated to take on Ronnie Hamayel of Youngstown in a 135-pound matchup was far from a waste of time, however.

"I got to spend a lot of time with baby daughter and rest my body but I know layoffs come with uncertainty when you come back," Chatman said of his time away from the ring.

"I've also been working on things in the gym like pacing myself and slowing down and taking my time".

Chatman won't be the only one in action from Downtown Boxing Club stable as the main event will feature rising amateur star Brian Sims taking on Armond Richard of Cleveland in a 145-pound bout.

Sims, a Euclid High School graduate has become a fixture on the Youngstown boxing scene since he first laced up the gloves roughly three-years ago while also keeping himself on pace to earn his degree from Youngstown State University in the near future.

This will be the first match for Sims since scoring a first-round knockout victory in December at The Saxon Club in Youngstown, but that does not mean Sims has been laying low.

Recently, Sims helped local Youngstown professional Alejandro Popo Salinas with a few rounds of sparring as he prepared for his latest contest.

While Youngstown will be well represented, those in attendance will be in for a treat as Kiante Irving from Pittsburgh will be in action against Derrick Miller of Monroe. 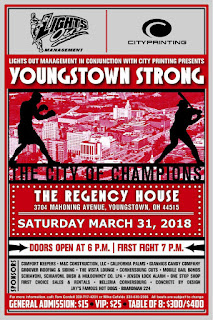 Also highlighting the 17-fight event will be Youngstown native and retired boxer turned author Craig Snyder who will be on hand selling and signing copies of his recently published book "The Boxers of Youngstown, Ohio: Boxing Capital of the World"

Snyder, who claimed the International Boxing Council Americas Jr Middleweight title on November 23, 1994, with a victory over Tommy Small finished his professional career which spanned from 1986 to 1996 with an 18-8 record.

Posted by Youngstown Boxing at 3:38 PM