Boxing Scene in Youngstown to Heat Up in March 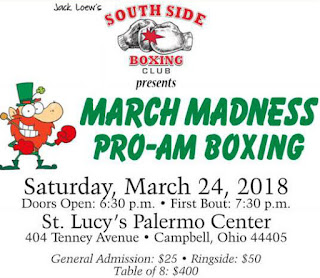 As the calendar flips from February to March the weather will not be the only thing heating up in the Youngstown area as the boxing scene will turn up the heat as well.

March will be the busiest month of boxing in Youngstown since summer as two shows are lined up beginning with the March Madness Pro-Am presented by Southside Boxing Club on March 24th at the Palermo Center in Campbell.

Headlining the Pro-Am event which will feature three local professionals will be Alejandro Popo Salinas who is trained by Jack Loew at Southside Boxing Club.

Salinas, 23, is on a six-match winning streak and will be looking to win some hardware in his scheduled 8-round match with Barnett as the vacant USA Mid American Super Featherweight Title will be on the line.

Barnett, 31, holds a record of 6-1 while the Chesapeake, Virginia native is on a current win streak of his own having won his previous three bouts.

This will be the first match for Salinas since he defeated Duarn Vue by decision at The Cannery in Las Vegas live on Fox Sports 1 in September to improve his record to 9-1. 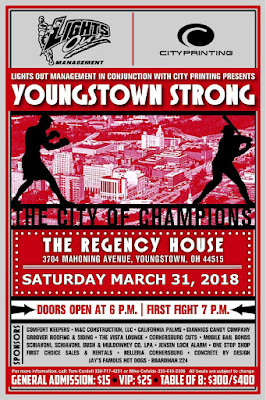 Also slated to appear on the card from Jack Loew's professional stable at Southside Boxing Club is Warren native Anthony Taylor.Taylor, 26, has been inactive since May as the super flyweight is slated to take on Jesus Rojas of Columbus, Ohio by way of  Brooklyn, New York.
Rojas, 25, currently holds a 2-3-1 record while Taylor will bring a 4-2 record into the bout.

Rounding out the local professional fighters who will be fighting on their home turf will be Danny Rosenger who trains with Tom Cordell at Downtown Boxing Club.

Rosenberger, 27, recently dropped a hard-fought decision to Justin Steave of Weirton, WV in Februarydsnapping his two-fight win streak and dropping his record to 2-4-2.

With the loss now behind him, the junior middleweight who resides in Howland by way of Niles will now turn his attention to Jauvan John of Brooklyn, NY.

John, 25, will bring a 2-4 record into the bout while going up against solid competition much like Rosenberger.

Closing out the month of local fight cards will be the Youngstown Strong amateur show being put on by Lights Out Productions which will take place at the Regency House in Austintown on March 31st.


While the area is slated to host two shows, amateur trainer Vinny O'Neill of Southside Boxing Club will look to keep his stable of young talent busy throughout the month.

O'Neill has a handful of boxers ready to start the month in action on March 10th at the All-Star Boxing Show presented by the East Side Daily News at the Martin Luther King Civic Center in East Cleveland.

Posted by Youngstown Boxing at 1:14 PM